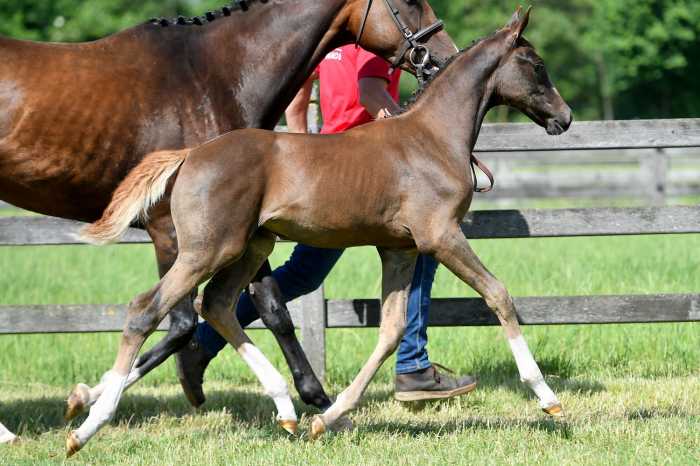 The first BWP Elite Foal Auction is a fact. 85 procent of the foals have effectively been sold and with an average price of 10000 euro we can look back in a positive way..

The top price of 23000 euro has been paid for Vega AEG and the foal stays in Belgium. Vega is a daughter of Conthargos x Indoctro. Her dam is the full sister of Hello M'Lady (Jumping 1.60m). Vega has been bred by the breeding farm Aegten.

The next three highest prices were all paid by Hungarian buyers. Vuitton EH, Vino vd Bisschop and Vancouver de Tiji move to Hungaria. Vuitton and Vancouver go to the same stable, the one of Viktor Nyiri. Vuitton EH, bred by BWP partner Axel Verlooy-Eurohorse was sold for 20500 euro. Vuitton is a son of Don VHP x Kannan out of the 1.60 mare Kismet.

For Vino vd Bisschop, his buyer spent 19500 euro. He is a product of Chacco Blue x Cicero and was bred by Den Bisschop Farm. He comes out of the line of Coriano van Klapscheut and was bought by Szuhai Gyula. This person also bought Valoubreaker-M for 11500 euro.